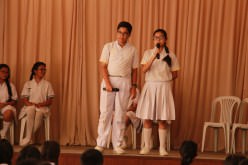 Inter-house spin a yarn contest was held in the school hall for grade VI – X.  The contest was divided into two groups – VI and VII (Middle school) and VII – X (High school). Two students from each house participated in the contest. In the middle school round, Tilicho and Phewa shared the first place, followed by Begnas and Rara in the second and third place respectively. Whereas, in the high school round, Begnas emerged victorious, followed by Tilicho in the second position. Phewa and Rara shared the third position.